Trace elements - one of the most discussed topics in the reef hobby. Many hobbyists reported positive effects after the regular addition of trace element supplements. However, at the same time there are also horror stories about the crash of entire systems. In the following article you will find out more about what trace elements are, what role they play in biological systems and what you should consider when dosing them. . .

What are trace elements?

Where do trace elements occur and what is their function?

Trace elements in the reef hobby

Not only a discharge of trace elements occurs, but also an input. Trace elements get into your tank, for example, through feeding, filling the evaporating water with tap water (note: we recommend using osmosis water for this purpose), water changes or the balling method and the operation of a calcium reactor.

Which trace elements are important for your reef tank?

For you as a reef hobbyist, the following trace elements are important: barium (Ba), boron (B), bromine (Br), cadmium (Cd), chromium (Cr), cobalt (Co), fluorine (F), iodine (I), iron (Fe), manganese (Mn), molybdenum (Mo), nickel (Ni), selenium (Se), silicon (Si), strontium (Sr), vanadium (V) and zinc (Zn). All these elements play an important role in biological processes occuring in your aquarium. If their concentration is too low or completely missing, deficiency symptoms can occur. You can recognise these, for example, by the fact that your corals no longer grow properly or their polyps no longer open completely. 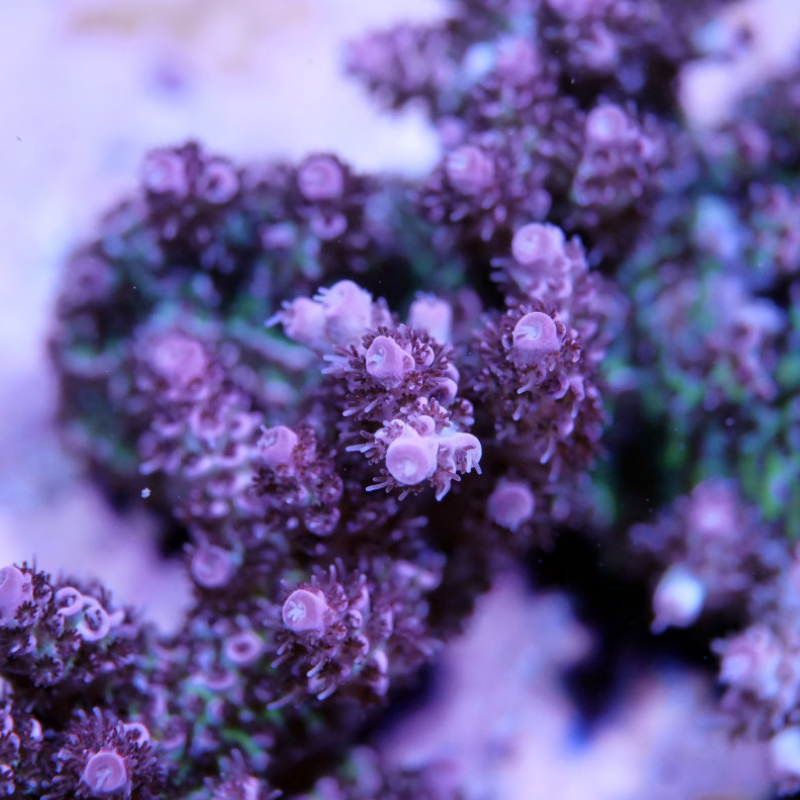 If corals hardly grow any more, show a bad polyp extension or changes in colouration, these can be signs of a lack of trace elements.

The determination of trace element concentrations in saltwater is extremely difficult and can only be carried out by experienced specialist laboratories. Fortunately, in recent years some companies have specialised in the analysis of water samples from reef tanks and offer this service at relatively low cost.

The preferred method for determining trace element concentrations in your saltwater aquarium is the so-called inductively coupled plasma, or shortly: ICP.

During ICP, a gas, usually argon, is introduced into a strong magnetic field where it is heated (~ 10,000 °C). This turns the gas particles into ions. The resulting ion gas cloud is now called plasma. If your water sample is introduced into this cloud, the particles in it absorb a lot of energy and go into an "energised" state which lasts only for a short time.

The previously absorbed energy is released by the energised particles into the environment in the form of light. Depending on which particle in your sample this light comes from, it has a specific wavelength. With the help of optical sensors, both the different wavelengths and their frequencies can now be determined. This is why this special method is also called optical emission spectrometry.

In a low or normally stocked saltwater aquarium, regular water changes should be completely sufficient to ensure the supply of trace elements. We recommend a weekly water change of 10%. Only use high-quality sea salt mixtures, whose composition has been specially adapted to the requirements of modern seawater aquariums.

However, if your aquarium is densely stocked or contains lots of fast-growing SPS corals, it is likely that the water change is no longer sufficient to supply it with trace elements.

What should you do if deficiency symptoms appear?

The first thing you should do is to keep calm, because over-eagerness is out of place here. If you suspect that it might indeed be a deficiency, you should have done an ICP analysis before you make any changes.

The ICP analysis will show you whether the concentration of a particular element is too low. If this is the case, most specialist laboratories will give you additional instructions on how to proceed to end the trace element deficiency.

When evaluating your analysis, keep in mind that there are elements (e.g. copper and zinc) whose natural concentration is below the limit of determination of an ICP-OES. The measuring method simply cannot detect these low values quantitatively.

Where water changes alone are no longer sufficient, combi products are suitable for a basic supply in reef tanks . As a rule, the concentrations of the individual elements in the solution are adjusted in relation to each other, although the manufacturers' formulations may differ. A very reasonable application is to couple the dosage of trace elements to the calcium consumption. Detailed instructions can be found in the info text of the Balling Method and the trace element solutions of Tropic Marin. If only a few trace elements are deficient, individual solutions are better suited to specifically increase the concentration of an element. Of course you can also use combi products and single solutions in combination. In any case, slowly approach the dosage.

In saltwater aquariums with medium to heavy coral stocking, it is recommended that the basic supply of trace elements is provided by combi products such as the A- and K+ Elements from Tropic Marin. Additional adjustments of individual elements can easily be made in parallel.

What should you do if an overdose occurs?

Also keep calm! If you are currently using trace element solutions, it is advisable to temporarily stop adding them. A first indication of a possible overdose is a bleaching of your corals. In this case it is also advisable to have a professional ICP analysis carried out. According to the results and information provided by the specialised laboratory, you can take appropriate corrective measures. For example, large water changes or the use of special absorbers and/or activated carbon can help to reduce the concentration of individual elements. Furthermore, the company Triton sells a product that was developed especially for the removal of toxic heavy metals: Triton Detox.

What role do nutrients and organic compounds have in the dosage of trace elements?

Especially in connection with the nutrition of farm animals in agriculture, there are many scientific studies dealing with trace elements.

These studies have shown that the sole addition of inorganic trace element compounds had no effect on the concentration of the added elements in the blood or tissues of the animals. Only the simultaneous addition of trace elements and organic compounds, such as citric acid or special amino acids, brought success.

In addition, scientists have observed that unicellular algae could only absorb trace elements in the presence of certain nutrients (ammonium, nitrite, nitrate and phosphate).

This provides a first indication that trace elements might only be absorbed by corals in the presence of organic compounds and/or nutrients.

For you as a reef aquarium keeper, this means that you can positively support the dosage of trace elements, for example by adding an amino acid preparation. You should also adjust the concentration of nutrients in your aquarium to an appropriate level. They should be very low but not below the detection limit.

Improving the colors of corals with trace elements - really?

Many experienced aquarists report an increase in coloration of their corals after the addition of trace elements. Unfortunately there is no scientific evidence for the observed phenomenon. This is also due to the fact that colour is difficult to measure objectively. If you want to try it yourself, you should be careful with the dosage of commercially available trace element solutions. Start with half of the recommended dosage, observe your animals very carefully and monitor the addition by regular ICP analysis. Before you start dosing trace elements to enhance the colour of your corals, there are a few things you should consider.

Trace elements are only one aspect that could possibly play an important role in colour development. More important is the stability of your water parameters, because corals are very sensitive to changes. Therefore, check your water values regularly so that you can intervene at an early stage in case of deviations.

Furthermore, the nutrient concentrations in your tank should be very low. If they are high, the symbiotic algae of your corals multiply strongly and cover the pigment molecules. This ultimately leads to your corals turning brown.

Another important factor is light. Make sure that your lighting is strong enough and that it has a higher blue content. The strength of the light, i.e. its intensity, can be measured with a PAR meter. Your lighting should give you PAR values that are on average in the range of 250 µmol/m2/s.

And now to the most important point: Patience. Always make changes slowly and give your corals time to adapt.